Another early start for this fabulous event, up at 5:30am van loaded with one of Tracey’s remarkable lunches and bacon baps f 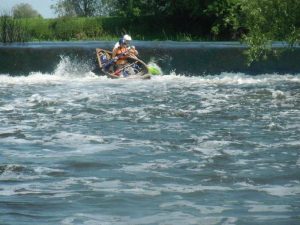 or 18 for breakfast, hitched the trailer and met up at the centre at 6:30am for remainder of the group to convoy to start position at Royal Leamington Spa where we met Pete King and his 6 merry paddlers and the 2 dogs. It was then a quick shuttle run to the get out point at Stratford Upon Avon then on the water for 8:30am.

We all had a nice short paddle down to Warwick Castle and with the hot sun beaming down on us the views were spectacular. This was our first portage point as no one can shoot this weir, with everyone back into their boats and photos taken we then paddled some more soaking up the scenery and having a laugh with other clubs. 3 weirs later, which we portaged due to the picnic and Tracey! It was getting on to nearly lunch time, however this time we had a huge tree down blocking the river so after getting the boats back onto dry land, it was decided we may as well luncheon at this point, so the small buffet all came out unfortunately I had left the 4ltrs of Pimms behind. after a well-deserved rest we headed off, we even had a spotter this time to look for more hazards along the route with Pete communicating loudly to Claire “yes you can paddle at some point” and there`s me Communicating as loud to Tracey “No don’t paddle” when using the rivers fast current at times, not to sure what the communication was like with the others!. Upon coming into Royal Leamington Spa and being a lovely hot day we encountered a lot more traffic on the water luckily this year we didn’t have the head wind with us for the last 3 miles, bearing in mind we had already done 15 at this point. The end was near just through the bridge and the ice cream van was a joy to see. All signed back in and collected our certificates, well done to all paddlers who helped raise money for the guide dogs for the blind.
Andy 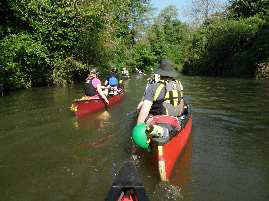