The planning had been done weeks ago, and three paddlers met up in the campsite at 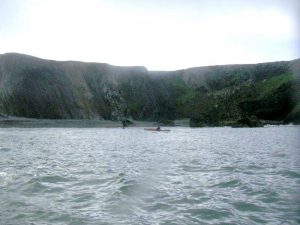 St David’s – Scott, Chris and Alan. The plan was simple – tomorrow we would set off at 8am to catch the slack tide, and cross the north end of Ramsey Island. Then we would paddle gently down the Atlantic side of the island, and cross back into Ramsey sound on the next slack water, six hours later, and paddle into the harbour to watch the Bitches waves form while making use of the tea rooms. The only problem might be the weather. 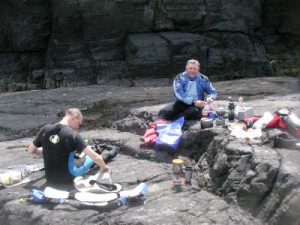 The last week had seen steady strong south to west winds, which are the ones that cause the Atlantic swell to pick up. However at 8am we left the beach at Whitesands Bay through small surf and paddled across to Ramsey Island. The tidal calculation was spot on as there was no tidal flow at this point, and only a very slight drift, first left then right as we approached the island.

Out here, a mile offshore, the waves were starting to pick up, enough that from one trough it wasn’t possible to see a paddler in the next trough. As we popped over the crests we got a good view of each other and our navigation marks.

We passed most of the north coast of the island, and started to feel the full strength of the swell. At times I could see Scott’s boat climbing up the wave in front, see-sawing across the crest and dropping out of sight. It was quite exciting, not helped by my left leg going numb and having to be removed from the footrest occasionally to restore circulation. There were many puffins and guillimots about which was a real bonus. The height of some of the waves was about ten feet from trough to crest. Fortunately they weren’t breaking.

Scott and I were both getting unhappy with the prospect. Once round the next headland we would be on a lee shore, with the waves pushing us towards the cliffs, and us paddling prallel to the waves, always an unstable option. In addition, we wouldn’t be able to land in the few small beaches there were, or rather having landed we would be unable to get off against the surf. The cliffs wouldn’t be easy to climb, even if possible. We decided to turn back. We paddled back across the north coast of the island and tried to turn the corner into Ramsey Sound, which would be sheltered from the rollers. However a tidal eddy meant that we made no progress round the corner. Occasionally a big wave would pick us up and surf us forward, then the resulting recovery stroke took us back again.

Paddling out into the middle of the Sound in the hope of getting a favourable tidal stream didn’t look attractive, because out there was wind against tide producing larger lumpy waves. We turned back to the north coast, and into the large sheltered bay.

Once ashore, we had a brew and considered the options. These were:
1 Radio the Coastguard for a lifeboat
2 Wait 6 hours for the next slack water and try to paddle out
3 Continue round the island as planned
4 Climb the cliff foootpath to get a phone signal, and call a local tour operator, Thousand Islands Expeditions, for a pickup.

We went for option 4. However the path hadn’t been used for years, part of it was washed away, and it was all slippery and sloping towards the drop back to the beach. Scott stayed with the boats while Chris and I managed to get up the path. Before I had reached the top I knew that we didn’t want to try going down that path – in wetsuit boots with no grip – so we would try and get picked up from the harbour. 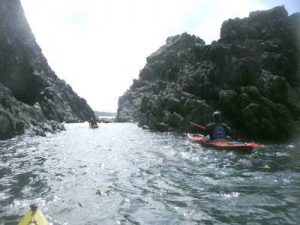 e got a good phone signal from the top of the hill, and a very helpful girl said “we have a trip just leaving”, so we headed rapidly towards the harbour. It was a normal fishingtype boat, not one of the big jetboats I was hoping for, but after they had dropped their passengers to do some bird watching on the island, they took us round to the bay with the boats. On the way the skipper was getting unhappy with the sea state he was getting into, and we were pitching and rolling a lot, but we made it through.

He couldn’t go too far into the beach so he headed in as close as was safe, and we swam ashore. During the swim a very inquisitve seal watched our rather slow style – from just a few feet away. Once in the boats we paddled out, and they loaded us and boats on board. We went back through the big seas off the headland, much more easily as the waves were behind us, and he gave it some welly. A short pleasure cruise later we were in Whitesands Bay, where we got back into the boats just offshore and paddled in to the beach.

The crew wouldn’t take any money, said just visit the office and pay for the diesel. When we did that they didn’t want any money either, just thanked us for not calling the lifeboat. We left a tip for the crew anyway. Such nice people.

On the beach we were met by the RNLI lifeguards and a coastguard. They were mainly interested in finding out whether we were all well and how prepared we had been – not bad, but not enough. In particular we should have got a local weather forecast the morning we set off, as it had changed overnight to 30 knot southerly. We should also have left a note of our plans with the Coastguard. It was quite a friendly chat, and they logged it as “caught out by the conditions” which seemed fair.

As we left to go back to the campsite we couldn’t see Ramsey Island for rain. We were definitely well off off the water. The rest of the day was spent in sightseeing round St David’s (20 minutes for Britain’s smallest city), sleeping, and waiting for the wind to drop so that we could barbecue. 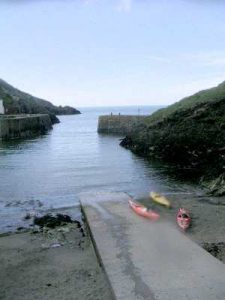 Day 2 After the adrenalin had died down, and a restful evening’s barbecue had been undertaken, it was decided to do a less committing trip on the second day. After some consideration of the map, we decided to try starting from Porthgain, and paddle along the coast to Abercastle and back, a round trip of around 6 miles. Starting at about noon would mean there was little tidal flow for either direction – important because we didn’t know what the flow pattern was like on this shoreline.

The wind had dropped overnight and the sea had calmed down remarkably quickly. After notifying the coastguard we loaded up and set off. We explored caves and inlets, we paddled between bits of the cliff that had fallen off (not recently!) and stopped for refreshment and a change into cooler clothes on an inaccessible beach. The sun was out and it was a glorious easy paddle. 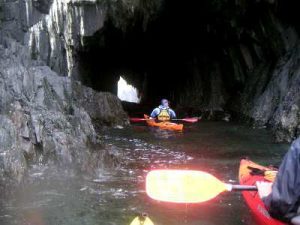 We stopped on a rocky ledge just outside Abercastle for lunch, and took our time, sitting in the sun. A group of paddlers appeared, evidently near beginners with a couple of instructors, having a good time rockhopping and exploring. A seal popped its head up to investigate. The return trip was a bit harder as we had a head wind, although nothing like as strong as the day before. As the tide had risen we were able to take a few more short cuts through small islands. Sadly the cave we were hoping to use to go under one headland still didn’t have enough water. Back as Porthgain the ice-cream shop beckoned – successfully.
Alan